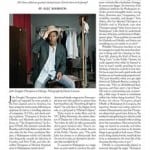 ABSTRACT: THE THEATRE SCENE about actor John Douglas Thompson. John Douglas Thompson, who is forty-eight and regarded by some people as the best classical actor in America, has been acting for twenty years, responding to an epiphany he had as a travelling salesman of computers, A.T.M.s, and check-sorting machines. Thompson is known for playing Othello and Macbeth and Brutus Jones, in “The Emperor Jones,” by Eugene O’Neill. His admirers include Ben Brantley and Charles Isherwood, the theatre critics for the Times, and James Shapiro, a Shakespeare scholar at Columbia, who describes Thompson as “the best American actor in Shakespeare, hands down.” Any list of American actors accomplished at Shakespeare would include Kevin Kline, Liev Schreiber, Al Pacino, and Meryl Streep. What makes Thompson different from them, aside from being black, is that he is almost exclusively a stage actor. Whether Thompson has lines or not, he manages to convey the sense that whatever is being said has a bearing on him. He says that when he plays Othello he lives within the play, and isn’t certain that he will kill Desdemona until the moment he does. Thompson is currently in Chicago, in “The Iceman Cometh,” by Eugene O’Neill, which stars Nathan Lane. Thompson’s character, Joe Mott, once had a gambling joint and lost it. Thompson played Mott as proud and defiant. “I have some deep wells, places I can go,” Thompson said. Lately, in an effort to broaden himself, he has decided that he wants to play Shakespeare’s comic roles—Malvolio, in “Twelfth Night,” Bottom, in “A Midsummer Night’s Dream,” and, eventually, Falstaff. Thompson’s approach to acting is painstaking, and he feels that, to play comic roles persuasively, he needs to learn the traditions of clowning. Last winter before going to Chicago, Thompson began to study clowning with Christopher Bayes, who teaches at Yale. Describes a clown class at the Yale School of Drama, led by Christopher Bayes. As an undergraduate at Le Moyne College, a Jesuit school in Syracuse, Thompson studied economics and marketing. After graduation, he moved to Connecticut and worked for a company that made business machines. One night he went to see August Wilson’s “Joe Turner’s Come and Gone,” at the Yale Repertory Theatre. It was only when he was laid off, a few years later, that he decided to try to become an actor. At age twenty-nine, he joined a conservatory belonging to the Trinity Repertory Company, in Providence. When Thompson’s working, he runs his lines constantly. As he washes dishes or cleans his apartment, he recites his entire part. The two roles in New York that really established Thompson were Othello, for Theatre for a New Audience, and Brutus Jones, in O’Neill’s “The Emperor Jones,” at the Irish Repertory, both in 2009. Mentions Tony Gilroy. Studying clowning involves finding and encouraging the character within you who yearns to do stupid things. Thompson’s manner is so cheerful that you can’t help imagining a darker quality lurking within him. Over the summer, after “Iceman” closes in Chicago, Thompson will create the characters of Louis Armstrong and his manager, a white man named Joe Glaser, in a one-man, two-character play called “Satchmo at the Waldorf,” by Terry Teachout. Describes a visit that Thompson and Teachout took to the archives at Queens College, to listen to Armstrong recordings.