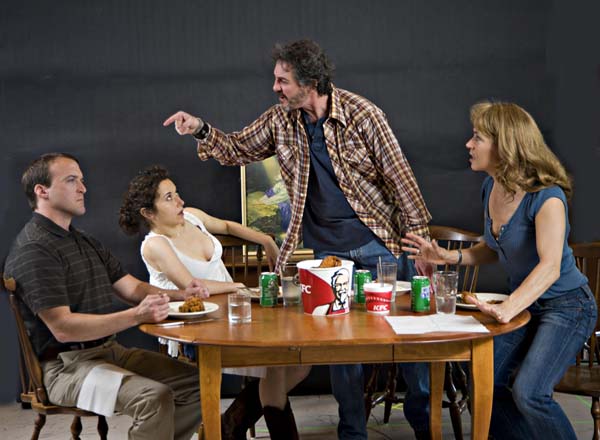 Ringing with family truths that are familiar in many of our lives, Parasite Drag unravels in Gene and Joellen’s modest Baptist home in Tolono, Illinois, where Gene’s older brother Ronnie shows up unexpectedly as a result of their sister’s health crisis. Amidst razor-sharp verbal sparring and laughter, past truths and secrets collide sending the deeply estranged brothers on a headlong journey into rough waters.

“It was in October 2010 that I found myself in a 42-seat theatre in Hollywood watching a new play entitled Parasite Drag, which I had heard wonderful things about,” says Rothman.  “As the first act ended I turned to my partner, Faye and I said, ‘I must direct this piece somewhere, sometime.’ I was drawn to this funny, irreverent and complex play on multiple levels – from the simplicity and truth of the language, the profound connection between these two brothers and the history they can’t quite let go of, to the high octane confrontation that finally erupts. It’s an incredible journey of four individuals – played beautifully by this extraordinary cast – with often funny, outrageous and heart wrenching moments.”

“There are no ‘bad guys’ in this play,” continues Rothman, “everyone is doing what they need to do to survive the hand that has been dealt to them in life. This play was done as a workshop originally so I’m really looking at our production as a world premiere and thrilled to be able to mine the intricacies of these sharply drawn characters and situations as Mark wrote them. It’s a play that rings with family truths that invariably resonate within our own lives, including mine.”