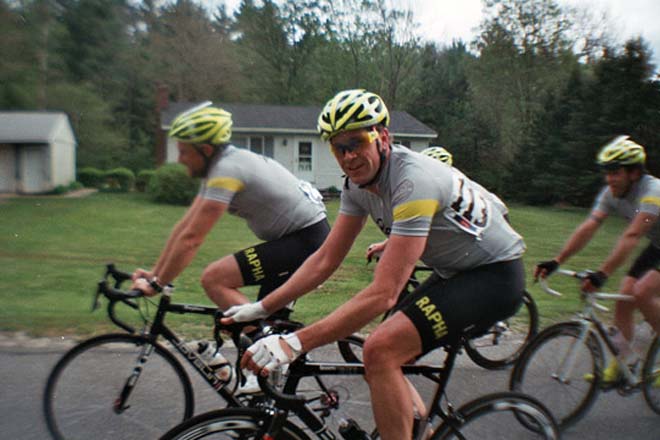 The Berkshires in Western Massachusetts played muse to Nathaniel Hawthorne, Henry Wadsworth Longfellow, Herman Melville, and on a Sunday morning this May, the Rapha NYC team. A group ready to trade the daunting urban hustle of New York City for the idyllic nature of rural countryside. Slowly rolling into the Massachusetts morning, horizontal sunlight brushes long shadows of spokes and frames onto the motel’s empty parking lot. The sun is promising so arm warmers are left inside. The early season air is clean. Every breath drawn seems to wash grime off dirty city lungs. It’s spring in New England, and the short trip to the starting line of the ride prepares the spirit and spins the sleep out of now fresh legs.

A few hundred other cyclists, many of them local enthusiasts, are out to ride the Berkshire Cycling Classic this day. Along the road, other locals stand ready with bells, helpful cheers or a friendly wave. Some have set up picnics to watch the passing colors and bodies of different groups pass in between their packed snacks and white wine. To them, these roads are like their home, and it seems to the out of town guests that they are anxiously showing off every room, turning on each light and explaining the origins of particular tables and art – this one passed down from a great grandparent, another purchased during their honeymoon. Every detail is fascinating, and their pride earns respect. Their guests act accordingly, sure to ride carefully and notice the beauty of a past generation.

The allure of the region has been meticulously preserved: sleepy towns, rolling hills, dense forest, clear streams and rivers, every detail is as it has been. The ride passes in between perfect pine trees with color that reaffirms nature’s ability to design – deep rust browns and rich dark greens. Out of the forest, after a long climb, a flock of sheep greet riders; they mill about in patterns meaningful only to them. Where there are not trees, grass grows three feet high, and crops are planted in rows. All of these Berkshires scenes, conjure up fantasies in one’s mind of a simpler existence, of barn restorations and hours spent in a workshop completing chores that leave palms dirty and arms sore. As guests, the sense of gratitude grows with every mile until it’s over.

The experiences of the 82 mile journey through the Berkshires were made more valuable because they were earned as a team. The responsibilities of professional and personal lives make training, and racing as a group challenging, but when a team comes together to share some wheels and a few laughs, the coordination, the email chains, and the time that goes into making it all work is easily justified. Excited to start as a team, the Berkshire Cycling Classic began like many New York City races with nervous number pinning and pre-ride coffees, but after the gun sounded, the nerves calmed and everyone settled into a beautiful ride. The difference was clear. Too often, days as a team involve harrowing crits or punishing races that result in individual experiences, but the best moments of this day came when our group became one line. Rotations were to be quick, and the pace constant. When everyone works together the speed quickens and the team becomes stronger than any individual. At the front a teammate pulls the others along, everyone depending on one. At the back a rider becomes aware of their part in something larger, their own dependance on everyone else.

Like being guests at someone’s house, pedaling through the towns of the Berkshires was an intimate experience. The effort left along the way draws a rider closer to the nature of that particular place, and when everything goes well, or better, goes wrong and turns out well, a new friendship is formed. This is the friendship of an experience and the circumstances that made it possible.