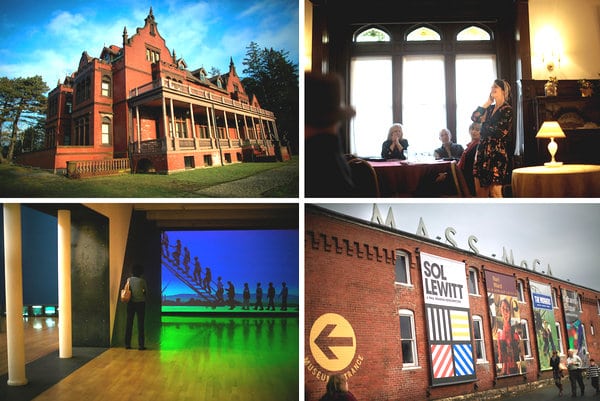 Traditionally, early September brings a frosty curtain down on this fair-weather communion of art and land. The region’s snowy scenes may have inspired some notable James Taylor lyrics and the color of American literature’s most famous whale. But by midwinter, Arrowhead, Herman Melville’s former home, is open by appointment only, and Mr. Taylor’s beloved Tanglewood sees more snowshoes than Champagne flutes.

Yet even in January, cultural life here thrives, at museums, theaters and music halls. And when it’s time for a little après-edification, you’ll find acres of elbow room on area slopes.

Start your cultural tour in North Adams, at Mass MoCA, one of the world’s largest contemporary art museums. The structure is in itself an attraction, built on the brick bones of a centuries-old complex of factories and mills between two fast-running branches of the Hoosic River.

A current exhibition plays directly on that history: “The Workers,” which runs to April 15, features 40 or so works that hew to the theme of American labor. Another exhibition will be around far longer — until 2033, in fact. The Sol LeWitt retrospective includes three radiant floors of prismatically colorful, huge drawings, which pair beautifully with window-filling vistas of the snowy foothills of Mount Greylock.

Mass MoCA’s performance stages stay busy in the winter as well. Notable coming acts include the jazz vocalist Catherine Russell on Feb. 18 and the Darrah Carr Dance troupe on Jan. 21, with a free workshop that afternoon.

Mass MoCA is a relative upstart compared with the grande dame of Berkshire museums, the Sterling and Francine Clark Art Institute, just 15 minutes up the road in Williamstown. Visit before Feb. 5 to catch the Rembrandt and Degas exhibition, which is making a stop between appearances at the Rijksmuseum in Amsterdam and the Metropolitan Museum of Art in New York.

Another much-anticipated show is “Clark Remix,” opening Feb. 12, a cutting-edge experiment in crowd-curating. Designed to make the most of the multiyear closure of several spaces in the museum, “Remix” will pack the walls of one lucky gallery with a floor-to-ceiling cascade of resident masterpieces. Starting with that jumbled configuration, visitors will then have a chance to assemble their own virtual gallery, using a tablet set up with a modified version of professional-grade curating software. “Remix” isn’t just an empty exercise in technology: two winning entries will actually be mounted by the museum.

Northern Berkshire County is usually a few degrees chillier than the rest of the county, so for some relative warmth head south to Pittsfield. Long set apart from the county’s traditional summer tourist scene and hot from its 250th birthday celebrations in 2011, Pittsfield is hosting 10×10 on North, the county’s first-ever winter contemporary arts festival, Feb. 16 to 26. It will feature exactly 10 of a number of things, including short pieces by two theatrical groups, Barrington Stage and New Stage; performances by poets, tango dancers and singer-songwriters; and short films.

More action can be found at the Colonial Theater, a Gilded Age treasure with a stage once graced by the Ziegfeld Follies, Will Rogers and Rachmaninoff. Reopened in 2006, the Colonial is now the heart of Pittsfield’s home-spun renaissance. Visitors come for both the magnificently restored architecture and a busy winter calendar, including performances by the Turtle Island Quartet (Feb. 17) and the Cajun masters BeauSoleil Avec Michael Ducet (Feb. 24), as well as weekly live music in the theater’s tasteful lobby.

Over in Lenox, Shakespeare & Company, a favorite of the summer theater scene, never lets the floorboards cool. Tina Packer, the company’s ebullient founder, attributes her year-round approach to a childhood spent under fickle English skies, and to her first Berkshire visit, years ago on a late winter’s day. Back then, she drove past the Mount, Edith Wharton’s then-derelict estate, which later became Shakespeare & Company’s first home. “I loved it, that moment early on a cold winter evening, the light going but not gone,” Ms. Packer said.” It was absolutely bewitching.”

Sadly, Wharton’s restored estate isn’t open in winter, except to cross-country skiers wise to its well-tended grounds. For year-round insight into fin-de-siècle 1-percenters, go instead to Ventfort Hall in Lenox, home to the Museum of the Gilded Age.

Ventfort was completed in 1893 by Sarah Morgan (sister of J. Pierpont), and George Morgan, a distant cousin. Ventfort was built on the site of the home where Robert Gould Shaw, the Boston-born Civil War hero, honeymooned just weeks before his death. Sarah Morgan herself died just five years after Ventfort was completed, and, in 1899, George re-enacted their Valentine’s Day wedding with a different Sarah, in a blizzard so severe that almost none of the guests made it to Lenox.

Wandering Ventfort’s fabulous rooms, it’s hard to imagine how close it came to demolition. The site’s rescue was assured only in 1997, as ice encroached on the parlor and the dismemberment of its interior architecture was already under way. Today, telltale blond highlights scattered throughout the original woodwork, darkened by age, testify to years of meticulous restoration.

Edith Wharton set a famously small Berkshire table. Sarah Morgan, on the other hand, was — as a tour guide described her — more of a “party girl.” So Ventfort Hall’s beloved “Dancin’ at the Mansion” soirees, held the second Saturday of each month, are very much in the spirit of the old house. All the better if your visit falls on one of those crystalline Berkshire nights when the wind lifts swirling snow from the dark fields and frozen lake, scattering it against the windowpanes. Inside, there’s music and laughter and fox-trotting through the once-abandoned rooms — a perfect companion to a cold winter’s night.

Mass MoCA (1040 Mass MoCA Way, North Adams, Mass.; 413-662-2111; massmoca.org) sprawls over much of downtown North Adams. Open Wednesday to Monday, 11 a.m. to 5 p.m. Admission is $15 and daily tours are offered. The cafe — with great food, free Wi-Fi and a view of an ice-clogged river outside — is a perfect spot for whiling away a snowy afternoon.

The Sterling and Francine Clark Art Institute (225 South Street, Williamstown; 413-458-2303; clarkart.edu) is 15 minutes west of Mass MoCA, in Williamstown. Open Tuesday to Sunday, 10 a.m. to 5 p.m.; free from mid-October through May. Check out winter lectures, classes, films and events for all ages.

Pittsfield’s inaugural winter arts festival, 10×10 On North, takes place Feb. 16 to 26 (discoverpittsfield.com/10×10) with free or individually priced events at various downtown venues; check the Web site for the latest on the work-in-progress lineup. The Colonial Theater (111 South Street, Pittsfield; 413-997-4444; thecolonialtheatre.org) hosts events and live music throughout the winter, including the Garage, a live weekly music series in the lobby, some free and others with a $5 cover, starting at 9 p.m., including an open bar.

Ventfort Hall (104 Walker Street, Lenox; 413-637-3206; gildedage.org) is open 10 a.m. to 5 p.m. on weekdays and 10 a.m. to 3 p.m. on weekends; tickets from $15. Enthusiastically guided tours are offered hourly on weekends, and during the week by appointment. Groups of 10 or more can pre-order a Victorian tea, and even a private concert. “Dancin’ at the Mansion” takes place the second Saturday of the month. The Feb. 11 event includes a full dinner, with guests named Sarah, George or Morgan taking $16 off the $60 admission, in honor of George Morgan’s Valentine’s Day weddings to Sarah One and Sarah Two. Cocktails at 5 p.m., with dinner to follow. Dancing only is $16 per person, $25 per couple, from 8 p.m.

WHERE TO STAY AND EAT

In a region that still conjures over-doilied inns in the minds of many visitors, you’ll have nothing to fear at the Kemble Inn (2 Kemble Street, Lenox; 800-353-4113; kembleinn.com), under new ownership and largely refurbished in 2011. Sarah Morgan stayed here while her Ventfort Hall was under construction. Rates from $175, including what may well be the county’s finest breakfast; dinner on Friday and Saturday nights, by reservation only.

The Old Inn on the Green (134 Hartsville New Marlborough Road, New Marlborough; 413-229-7924; oldinn.com) is a half-hour drive from many of the county’s winter cultural attractions mentioned here, but the fireside feasts at this classic New England inn are well worth the trip. There’s not a single electric light in the dining rooms — it’s all candles, all the time. Upstairs, rooms start at $249 on weekdays, some including a prix-fixe dinner; weekends from $260, including breakfast.