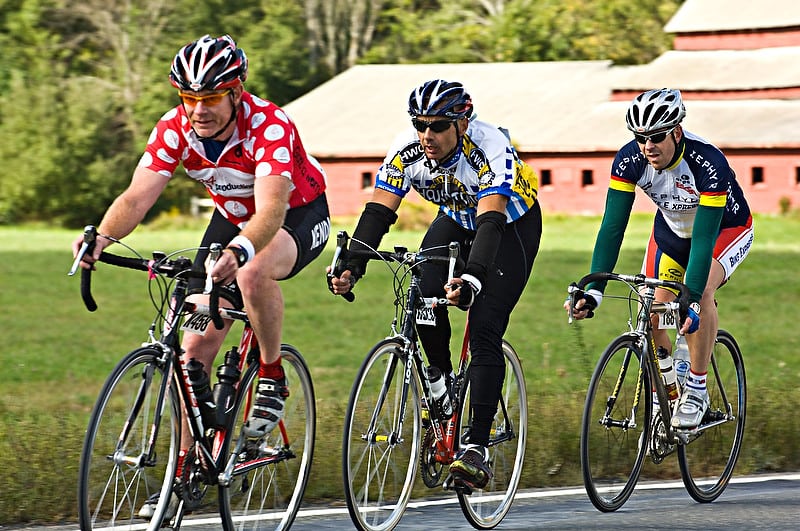 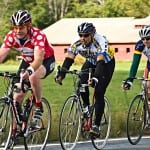 LENOX — (From the Berkshire Eagle) – As the starter’s gun went off on a normally sleepy early Sunday morning downtown, 287 riders competing in the first annual Berkshire Cycling Classic shot out of the gate in a swarm of colorful blue, yellow, black and white riding outfits.

The event, organized by former riding champ John Eustice of Sparta Cycling, was cited by resident, local and state officials as a high-profile recreational and competitive ride for county residents as well as biking enthusiasts and pros from 22 states, including California, New Mexico, Utah and Florida.

Also represented were On tario and Quebec provinces of Canada and several foreign countries, including Brazil, Ar gentina, Germany and France.

About half of the participants were Berkshire County residents. Riders had a choice of hilly, 62- or 81-mile courses through a dozen South Berkshire rural communities.

About two-thirds of the bicyclists chose the long route, which included an especially grueling climb from Tyringham valley to Monterey’s hilltop.

The first rider to complete the shorter course, coming in three hours after the start, was Brett Cleaver of Brooklyn, N.Y., nonchalantly munching a banana as he crossed the finish line to the cheers of onlookers.

“Some of the climbs were longer and more subtle than I expected,” he said, appearing surprisingly relaxed. “I thought they would be somewhat shorter and steeper, so that made it a bit of a grind at times.”

was far ahead of the field for most of the ride after the two routes split in Tyringham and summed up the day as “a five-star event, across the board.”

Cal Reeder of Cameron Park, Calif., near Lake Tahoe, was the official timed winner of the Cycling Classic, as the first 81-mile rider to cross the finish line at 3:33:39. He said he averaged 22.6 miles per hour. Waiting at the starting line was the toughest part of the day, he said.

Retired international racing champion Erik Zabel compared the long course to a stage of the Tour de France — “some riders from there would love it, but most would hate it because it’s really hard, it’s difficult to find the rhythm in the race. It’s a tough area for a cyclist, all the ups and downs, but it’s fantastic and a beautiful landscape.”

Zabel, 38, a native of East Germany, retired from pro cycling in 2008 after more than 200 victories, including six first-place finishes as best sprinter at the Tour de France between 1996 and 2001.

Finishing sixth in Sunday’s 81-mile competition at 3:36:31, he noted the 6,000-feet of total elevation gain, “I feel it now,” he said, enthused over a “really, really nice Sunday morning ride.”

“It was a great honor for me to have

The riders head out of Lenox at the beginning on their tour of 12 Berkshire County towns. (Stephanie Zollshan / Berkshire Eagle Staff)

been brought here by the organization,” he added.

Christian Limberger of Sheffield, the first Berkshire rider to complete the shorter route, called the final 20 miles the most challenging, especially the long hill up Lenox Mountain Road. He said he was pleased to find that the route went past his house on Maple Avenue.

Tanya Beecher of Housa tonic was the first woman to complete the 62-mile route, while Anne Marie Miller of New York City was the first finisher of the long course.

Local police manned key intersections along the route, and portions of downtown Lenox were cordoned off to through traffic, creating a festive, block-party atmosphere, especially in the afternoon as riders returned individually or in small groups.

Eustice, addressing the riders before the start, called for “a nice and calm first 10 miles, just like a professional race. After that, you have 6,000 feet of climbing to get your ya-yas out. It’s a gentlemanly, gentlewomanly ride, nice and chill coming out of town. There’s no sprinting or head-butting at the start or the finish line. Trust me, this thing is hard enough.”

Eustice thanked the entire town of Lenox for “pulling together, believing in this event. They helped rally all 12 towns, a big civic cooperation.”

“I can’t tell you how much your support means to us,” said Kim Flynn, who heads the town’s Marketing and Events Committee and was a key local organizer. “Come back next year and bring all your friends.”

State Rep. William “Smitty” Pignatelli, D-Lenox, read a citation of congratulations from the state House of Representative for Zabel and all the other riders who joined the International Cycling Union’s sanctioned event, the only American event on the 15 stops on its worldwide tour.

“It’s a perfect day, they set it up quick, it puts Lenox on the map and it speaks volumes for the Berkshires,” Pignatelli told The Eagle. “It’s a boost for tourism and a kickoff for the summer season.”

Kevin Sprague. head of Studio Two design and a former racer, praised the event’s recreational and racing combination as he prepared to ride the “pretty challenging” long course.

“This is very appropriate for the Berkshires,” he added, but also urged town government financial support for long-established events such as the Josh Billings RunAground.

The race started at precisely 8:32 for the 81-mile endurance riders and a minute later for the 62-mile group.

He emphasized the role of the town’s New York-based marketers, Bodden Hamilton Partners, for connecting the town to the race organizer. “Without them, this wouldn’t have happened,” he said.

Looking ahead to next year, Eustice said he anticipates more time for establishing closer connections with each town on the route. “For the first year, it’s a great first step and then every year you drill down further.”